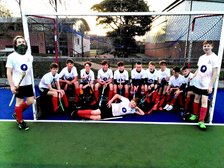 A First For Kelso Hockey Club

A sunny afternoon at George Watsons College, Edinburgh saw Kelso Hockey Club field their first ever Under 15 Boys team in a friendly match against Watsonians Hockey Club. A squad of 13 players made the trip up the road to take on an experienced Watsonians U14 Boys team.

For some of the players, all aged between 11-14, this was the first time playing a full pitch 11-a-side game involving penalty corners. The game, played in four quarters, was fast paced and end-to-end, with Watsonians ending the first half 1-0 up at the break.

The second half continued with Kelso holding their own and both teams had opportunities to score. Watsonians increased their lead with some clinical finishing, which seemed to be the main difference between the two sides as Kelso, still creating chances, were unable to find the back of the net.

Alongside a return fixture Kelso Hockey Club are planning to offer future opportunities for this squad of players to develop. The club are particularly keen to encourage more boys and men to get involved with the game. If anyone is interested in playing or getting involved with the sport please get in touch at info@kelsohockeyclub.com